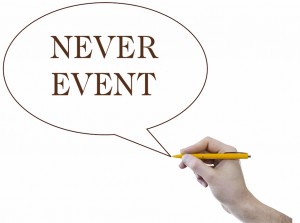 In the medical world a “Never Event” is described as a serious, largely preventable patient safety incident that should simply never happen if all available preventative measures have been implemented. However, “Never Events” do unfortunately occasionally occur.

In May 2014 it was reported that an NHS Trust in Liverpool had performed a Vasectomy by mistake on a gentleman who had gone into hospital for a routine “minor” urological procedure.

It would appear that he was added to a list of men, all of whom were due to have urological procedures, but his procedure was listed in error as a vasectomy. The vasectomy has since been reversed but the gentleman faces an anxious wait to see if this has been successful. If it hasn’t, such that he is consequently unable to father children, the Trust could face a six figure compensation claim. This type of incident is very rare and has been described by the trust as a “Never event”.

Hospital Trusts are required to monitor “Never Events” within the services they commission and to publicly report them on an annual basis. Unfortunately it would appear that these events happen more often than they should.

TSP’s Stephen Skinner has recently dealt with a case where a series of clerical errors resulted in a Carpal Tunnel Release operation being carried out on a patient’s “good” arm by accident. Needless to say the Trust has settled the claim very quickly.