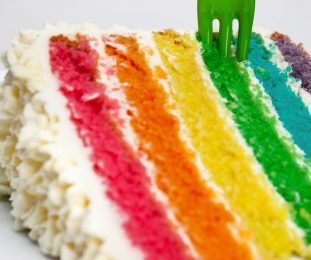 On Tuesday 10th October the Supreme Court ruled that the bakery in the high profile ‘gay cake’ case had won their appeal against a discrimination claim. Richard Porter, head of the Employment Law team at Thompson Smith and Puxon, considers the implications for Employment Law of this ruling.

The facts will be familiar to you by now. Back in 2014 Mr Gareth Lee (associated with the LGBT community in Northern Ireland) placed an order at Asher’s Bakery, County Antrim for a cake with the slogan ‘Support Gay Marriage’. The order for the cake was initially accepted by an employee but the business owners subsequently rejected the order as the slogan was against their religious beliefs. The order was refunded and Mr Lee purchased the cake from another bakery.

Following the cancellation of the order, Mr Lee sued the bakery under Northern Irish regulations which prohibit sexual orientation discrimination in the provision of goods and services, and claimed discrimination on the grounds of political opinion.

In May 2015 the Christian-run bakery lost the case at the County Court. The County Court Judge accepted that the company would have supplied Mr Lee with a cake without the message, and that it would have refused to supply the cake with the same message to a heterosexual customer, but it held that the company treated Mr Lee less favourably on the grounds of sexual orientation because Mr Lee’s support for same- sex marriage was indissociable from sexual orientation. The NI Court of Appeal upheld the Judgment of the County Court.

This has to be right. Commentators have pointed out that if the original decision was correct, situations might arise where  a Muslim printer could be required to print cartoons of the prophet Mohamed, or a Jewish baker could be obliged to decorate a cake with messages of holocaust denial, both of which are inconceivable in a just society.

However the question of association is one of fact and degree. The case leaves some uncertainty surrounding the extent to which a service provider can rely on the idea that they are objecting to the message, not the messenger. For example (sticking with baking as an example), to what extent could a baker of wedding cakes lawfully refuse to bake a cake for a same-sex wedding? Clearly, if the cake bore no particular features identifying it as being for a same-sex wedding, the bakers would have no argument. However, if the request was to decorate the cake with two male figures in an embrace, and the names “Bert and Ernie” iced onto the surface, would the bakers be able to refuse on grounds that they object, not to the sexual orientation of the couple in question, but to the idea of gay marriage in the abstract? Or would the existence of an actual gay couple mean that this was a case where the reason for refusal is “indissociable” from their sexual orientation? This question has yet to be answered.

What are the implications in Employment Law?  What would have happened if the employee had refused to accept the order on the grounds of his or her own religious beliefs, or what would have happened if an employee had refused to ice the cake for the same reason?  In these situations an employer needs to be conscious of the possibility of indirect discrimination on the grounds of religion or belief. The general practice that employees must follow instructions is a “Provision, Criterion or Practice” (PCP) for the purpose of discrimination law and the threat of disciplinary proceedings is a “disadvantage”. Indirect discrimination would occur where the employer applies the same PCP to a group of workers, ( including those who are not of the same religion or belief as the employee concerned), and the PCP puts those of the employee’s religion or belief (or lack of religion or belief) at a particular disadvantage when compared to other persons and the PCP actually puts the employee at that disadvantage and the employer cannot justify the PCP by showing it to be a proportionate means of achieving a legitimate aim. It would be sensible to have a policy to allow workers to refer such orders or jobs to another worker, but what would happen if there is only one worker and he/she refuses the order or instruction.  This is when the question of justification comes into play.

To establish justification, an employer will need to show that there is a legitimate aim (a real business need) and that the PCP is a proportionate means of achieving that aim (that is, it is reasonably necessary in order to achieve that aim, and there are no less discriminatory means available). This involves a balancing act between the needs of the employer and the discriminatory effect of the PCP. In considering the extent to which justification is made out, there is a substantial body of law dealing with all discrimination strands that will be relevant, and you may well find it helpful to contact us for advice.

If you would like to discuss this or any other employment matter, please contact Richard Porter on 01206 217027 or email richard.porter@tsplegal.com.