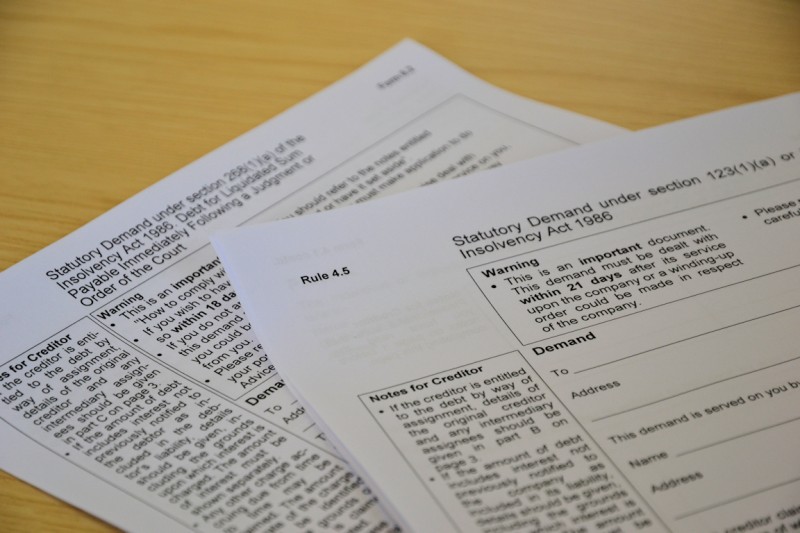 You may be able to recover an undisputed debt from a company either by serving a statutory demand or threatening compulsory liquidation (also known as winding-up) by the court.

What is a statutory demand? A statutory demand is a written notice in a prescribed form demanding payment of a debt owed by a company to one of its creditors. If the debtor doesn’t pay within three weeks, this may constitute grounds for presenting a petition for winding up if the debt is in excess of £750. There are a number of advantages of serving a statutory demand

A statutory demand can also be served on a sole trader as long as the debt is for a minimum of £5,000.  Non payment by an individual following a statutory demand can constitute grounds for a bankruptcy petition against the individual.Where an individual is insolvent, a creditor can begin bankruptcy proceedings against a debtor by presenting a bankruptcy petition to the debtor’s local court. An insolvency practitioner (also known as the trustee in bankruptcy) is then appointed by the Court to realise and distribute the debtor’s assets.

What is a winding-up petition? The threat of starting winding-up proceedings can put considerable pressure on a company to prioritise your debt. However, these proceedings should generally be regarded as a last resort. The court requires a creditor to behave reasonably before starting winding-up proceedings and, in particular, to write to the company with details of the debt and demanding payment. It is an abuse of process to issue a winding-up petition if a debt is genuinely disputed. If a winding-up order is made, a liquidator will be appointed by the court to collect the assets of the company and distribute the net assets, if any, equally among the company’s unsecured creditors. The petitioning creditor does not get any priority in this process (unless they have security over any company asset or they are one of a small group of preferential creditors). They may receive only a small percentage of their claim, or perhaps nothing at all, at the end of the liquidation process.

See our business briefing – Using a Winding Up procedure to chase debts.

The TSP Dispute Resolution team has a wealth of experience dealing with statutory procedures, and can help you recover a debt that is owed to you or your company by

If you have a problem with a debt, no matter what the size, or need help with recovering a series of debts that are owed to you, please do get in touch with the TSP Debt Recovery team here.