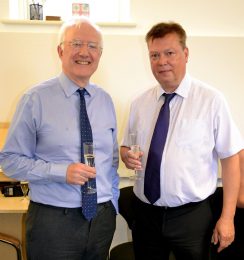 After 37 years of service at Thompson Smith and Puxon (TSP), Director and Clinical Negligence Solicitor, Julian Wilson, has retired from the practice.

Originally qualifying as a Barrister, Julian joined TSP in 1981, the same year he qualified as a Solicitor. He became a partner in the firm and Head of the Litigation team in 1985 and was the firm’s Managing Partner and Finance Director for 25 years before retiring from the position in January 2016. During his time as Managing Partner Julian led the firm in its move from premises on North Hill in Colchester to the firm’s current home at Stable 6, a move that has stimulated significant growth in the firm and raised its profile regionally.

The TSP Clinical Negligence team has been recognised by the Legal 500 as one of the leading practices in the South East of England for many years and as one of the top two practices in Essex in 2017. Julian is a Legal 500 Recommended Lawyer and has also been accredited for many years by both the Law Society and AvMA for his Clinical Negligence work.

During his time at TSP Julian has worked on a number of notable cases. In 1998 Julian acted for Mr Barrett in Barrett v Enfield London Borough Council. This was a landmark case which went to the House of Lords and changed the law – establishing that children who have been taken into care were owed a duty of care by the local authority. This is a case which most law students are required to learn about when studying for their degrees.

Over the course of his distinguished career Julian has helped a number of children who have been injured at birth, and their families, in a number of cases winning multi-million pound settlements. These settlements have allowed the families and children, whose lives have been devastated, to start rebuilding their lives.

The Directors of TSP hosted a retirement presentation for Julian at the firm’s Colchester office on Wednesday (27th June). Directors and Staff wished Julian well, toasted his time at the firm, and enjoyed sharing a retirement cake. Julian, an opera buff, was presented with tickets for the Glyndebourne festival as a leaving gift.

Current TSP Managing Partner Steve Webb thanked Julian for his many years of service to Thompson Smith and Puxon and praised him for his distinguished and ground-breaking career. Steve said “Julian has made a huge contribution to TSP during his time at the helm of both the firm and the Litigation team and, whilst we will miss him very much, fully deserves a long, happy and healthy retirement.” 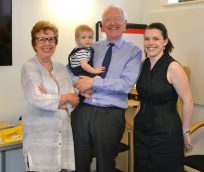 Julian Wilson with his wife, daughter and grandson. 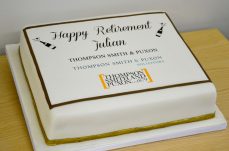 The evolution of the TSP logo!