Farewell to North Hill After More Than 130 Years 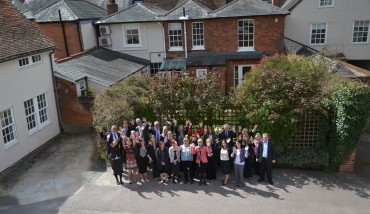 Directors and Staff of Colchester and Clacton law firm Thompson Smith and Puxon (TSP) gathered together yesterday afternoon to bid farewell to their former office at 4 North Hill Colchester, which the firm had until recently occupied since Edward Thompson Smith started practising as a solicitor in the town in 1879.

Following a sustained period of growth, TSP moved to new premises at Stable 6, Stable Road, Colchester, in January 2013, but the former premises at 4 North Hill office were returned to the landlord (the eponymous Mr Puxon’s daughter) just yesterday. Stable 6 is less than a mile from North Hill and a seven minute walk from Colchester Town centre.

Mark Cooksley, TSP Director, who had worked at the North Hill office since joining the firm in 1988 said, “Much as I loved my old office in the fine Georgian building we had on North Hill, it was not terribly efficient as an office space with, for example, solicitors being on one floor and their support staff on another. Our use of space is infinitely better in our new office at Stable 6, and the air-conditioning is wonderful.”

“North Hill had served the firm very well for the last 130 years or more, but as TSP has grown, so it became apparent that we would need to move were we to continue to build on our success. In Stable 6 we have found a building with a wealth of history and character which resonates wonderfully with our own history in the town, but which also allows us to modernise, to keep pace with ever-changing technology and to ensure that we are doing as much as we can to look after our environment.”

The History of the Firm: The firm can trace its roots back to 1879 when Edward Thompson Smith first started practising as a solicitor in Colchester, initially on his own.