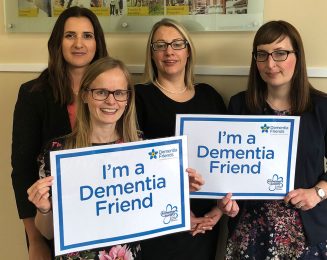 Organised by the Alzheimer’s Society, Dementia Action Week (DAW) is an annual event aimed at bringing communities and organisations together to take action to improve the lives of people living with dementia. This year DAW is taking place from Monday 20 May to Sunday 26 May and Thompson Smith and Puxon is pleased to be able to support the event.

The Dementia Friends programme is an Alzheimer’s Society initiative designed to change people’s perceptions of dementia. TSP currently has five Dementia Friends, four of whom are based in our Clacton Office (pictured left) and one in Colchester. However, in support of DAW the firm is giving its entire staff the opportunity to become a Dementia Friend and will be offering Dementia Friends sessions in both our Colchester and Clacton offices on Wednesday 22 May.

Becoming a Dementia Friend is not an onerous commitment. The emphasis is on learning about dementia, being aware, and recognising the small ways in which you can help. It is also possible to sign up at www.dementiafriends.org.uk

As well as the training mentioned above TSP will also be supporting the activities of the local Colchester and Tendring –based Dementia Action Alliance (DAA) Groups. Thompson Smith and Puxon is a member of both local groups and regularly attend the DAA meetings held in Colchester and Clacton.

The Clacton and Colchester meetings are attended by one of our Dementia Friends.

Living with Dementia: The Statistics

According to Alzheimer’s Research UK Dementia is the UK’s greatest medical challenge. Their statistics, published at the end of 2017, highlighted that one in three people have a family member or close friend living with dementia. They also found that the Clacton parliamentary constituency is one of the top three locations with the highest prevalence of dementia, per head of population at 24 per 1000 (Source: Alzheimers Research UK). According to the Tendring Dementia Action Alliance group the number of people diagnosed with dementia in Tendring in 2013 was 2973. The actual number is likely to be much higher considering that only 44% of people actually receive a diagnosis (Source: Dementia Action Alliance).

In 2018 Solicitors for the Elderly (SFE) launched a campaign to encourage people to tackle the taboos around end of life planning, in order to prevent an incapacity crisis. Headline figures from their research are as follows:

Solicitors for the Elderly (SFE): Is an independent national organisation of legal professionals who provide specialist legal advice for older and vulnerable people, their families and carers. Wills and Estates team leader Fiona Ashworth and Associate Solicitor Aileen Hirst (Colchester) are full accredited members of SFE.  You can find out more here.