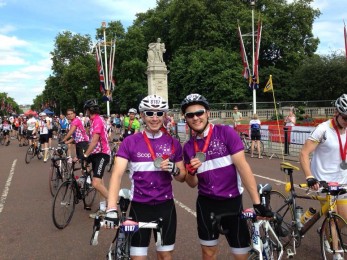 TSP Wills and Estates solicitor, Robert Ashworth (pictured right), will be taking part in an annual festival of cycling this weekend, the Prudential RideLondon-Surrey 100.

The event celebrates the legacy for cycling created by the London 2012 Olympic and Paralympic Games and the route follows large parts of the Olympic road race circuit. The ride starts in Queen Elizabeth Olympic Park, then follows a 100 mile route on closed roads through the capital and into Surrey’s picturesque countryside before finishing on The Mall in central London.

Robert says: “I have been cycling for about 3 years and confess that like a lot of other cyclists it was following the success of the Olympics that I took a keen interest!  I have taken part in a number of charity cycling events.  In 2013 both myself and my friend Paul Bird took part in the very first Prudential RideLondon 100 mile ride and raised over £2,000 for the charity Scope (pictured) and in the same year I helped to organise a cycling event raising over £6,000 which was split between Addenbrooke’s Charitable Trust and Farleigh Hospice.

However, since my daughter Annabelle was born in August 2014 I haven’t been able to devote as much time to cycling as I would like but I try to get out as much as possible especially if it is for a good cause. I enjoy the challenge of cycling 100 miles – it gives you a real sense of achievement and it requires a lot of training and planning that wouldn’t necessarily be required for shorter rides.”