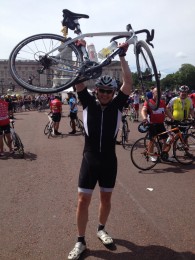 TSP Private Client solicitor, Robert Ashworth, was pleased and proud to have completed the Prudential RideLondon-Surrey 100 on Sunday 2 August 2015.

Robert finished the 100 mile route in an impressive time of 5 hours 23 minutes, and, along with his fellow riders, Trevor Sleeman, Paul Bird, Robert Spedding and Ed Thompson, was raising money for Hypermobility Syndromes Association (HMSA). The team have so far managed to raise over £500 but there is more sponsorship money to be collected. It’s not too late to support them now though and you can still sponsor them via their JustGiving page here.

The Prudential RideLondon-Surrey 100 is an event which started in 2013 to celebrate the legacy for cycling created by the London 2012 Olympic and Paralympic Games and the route follows large parts of the 2012 road race circuit.

Robert says: “The day went extremely well. We were up at 3.15am on Sunday morning and left home at 3.45am to make sure we arrived in enough time! I did the ride with one of our team and we managed it in 5 hours 23 minutes at an average speed of 18.6mph. I was happy with that as it was a 37 minute improvement on 2 years ago!

It was a fantastic day of cycling and we were very lucky to take part in such a well organised and supported event, with a great atmosphere all around. Many thanks for HMSA for providing us with the places. Hopefully we will be back next year to break the 5 hour barrier”

About HMSA
HMSA is a charity which offers both practical support and health and care information to people who have a hypermobility syndrome, or are involved in the care of someone with any of the hypermobility syndromes. If you would like to find out more about the charity, please click here. 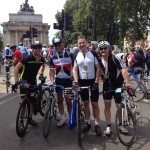 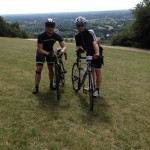 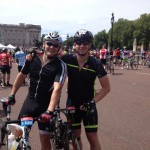 Robert Ashworth and Paul Bird on The Mall 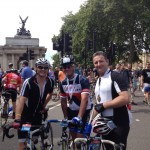