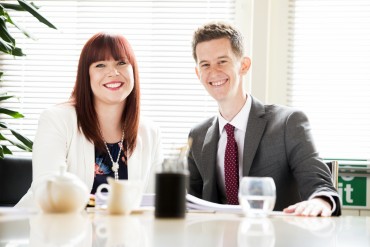 TSP is pleased to announce the appointment of two new members to the firm’s central administration team. Robert Stuart has joined the firm as IT Manager and Amanda Gentry as Office Manager.

Robert, who has worked previously in a similar role to the one he has taken on at Thompson Smith and Puxon, said “I enjoy working in IT as I love finding solutions for problems. I get the most satisfaction from making improvements that have a positive impact for the business and, just as importantly, the staff.”

Robert is looking forward to his new role which he feels has a really good mix of working with people, developing his management skills and of course getting his teeth into all of the technical issues that a role of this type usually brings.

Amanda said “I love the variety that my role at TSP brings. No two days are the same and I very much enjoy the fact that my role means that I get to know and work with everyone at TSP.”

Chief Operating Officer, Sean Stuttaford, who leads the central team said “I am really pleased to welcome Amanda and Robert to TSP. As the firm continues to grow there is an ever increasing need for a strong central team and this double appointment ensures that we are well placed to face the challenges that further growth will bring.”