Thompson Smith and Puxon Solicitor, Will Quince, Elected as Colchester’s Member of Parliament 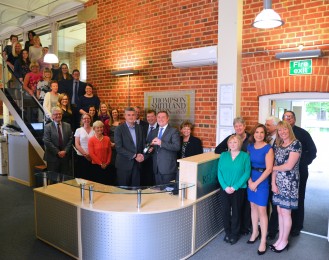 The Directors and Staff of Colchester and Clacton law firm Thompson Smith and Puxon (TSP) today congratulated their friend and colleague, solicitor Will Quince, on his election overnight as Member of Parliament for the Colchester Constituency.

Will joined TSP in July 2013. He gained his Law degree at the University of Wales, Aberystwyth, in 2005, but went on to work for Britvic Soft Drinks PLC in a Business and Customer Development role before deciding in 2010 to progress his legal career. Since joining TSP Will has been a member of the Residential Property team, undertaking conveyancing work, helping the firm’s clients to buy and sell their properties.

Stephen Firmin, Director, who leads the TSP Property team, said “Will has been an asset to TSP since he joined us. He has successfully and seamlessly managed to combine his legal career at TSP with his political aspirations, without ever allowing one to interfere with the other. I am sure that I speak on behalf of everyone at TSP when I say that we are really pleased for him and wish him every success for the future!

Will added “I want to thank the Directors and Staff at TSP for being so supportive during the election campaign and I am looking forward to the new challenge that awaits.”

Will, who polled 18,919 votes for the Conservative party, replaces Liberal Democrat, Sir Bob Russell, as MP for Colchester with a majority of 5,575 votes.