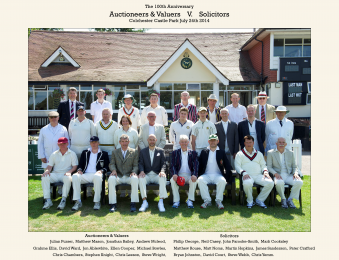 A number of long established Colchester firms were represented on both sides in the match that day and just a few days later some of them bravely went off to fight in the war, some never to return.

Yesterday, exactly 100 years on from the date of the original match, the match was replayed, not only in memory of those who fought in the Great War, but also to raise as much money as possible for two charities, the Rob George Foundation and ABF, the Soldiers Charity.

TSP’s Nicola Crisell, a member of the organising committee said “We’re remembering a poignant game 100 years ago because war broke out not long after the game was held. It’s about remembrance but also about having fun and raising money too. We’ve been working on this, the 100 year anniversary match, for nearly a year now and it has all come together really well. The weather couldn’t have been better for us and there are lots of people from local firms who have supported us with donations and who have also come along to watch and support us today.”

In the match played 100 years ago the Solicitors were soundly beaten by the Auctioneers so were hoping for a better result this time around, which is exactly what happened!

The Auctioneers & Valuers batted first reaching a total of 143 for 7 for the 30 overs they faced. The highlights from the innings were opening batsman, Chris Chambers of Nicholas Percival, who, as required by the rules, retired Not Out on 30. Jonathan Bailey of Fenn Wright scored a great 29 also. For the Solicitors, Chris Yemm of Fisher Jones Greenwood took 4 wickets for 13 runs from his 4 overs bowled and John Brooke-Smith of Trinity Chambers 2 wickets for 2 runs from his 2 overs!

The Solicitors chased down the target set for them in just under 23 overs. The headline makers for the Solicitors’ team being David Cant of Birkett Long, who opened the batting and Chris Yemm of FJG, both of whom retired Not Out when they reached 30. Chris Chambers, Nicholas Percival, was the pick of the bowlers for the Auctioneers & Valuers taking 3 wickets for 15 runs from the 4 overs he bowled.

The scorecard from the match detailing the full result can be seen here.

Most importantly though the event raised £5545 for the two charities the event supported, The Rob George Foundation and ABF, the Soldiers Charity. The money was raised through local firms supporting the event with donations for a feature in the souvenir programme, donations on the day for a programme, the raffle and the charity auction which took place after the match.

Well known Bargain Hunt and Flog It auctioneer, Mark Stacey, who has recently joined Reeman Dansie Auctioneers presided over the auction which alone raised £850! Thanks to all of the firms that donated both to the auction and the raffle.

Thompson Smith and Puxon were represented in the match by Steve Webb, Director and Head of the Personal Injury team. Steve said “It was a great day, if a little too hot to be playing cricket! I was really pleased to be able to follow in the footsteps of Osmond Thompson Smith who represented the firm in the 1914 match and, of course, extremely delighted that the Solicitors managed to exact revenge on our Auctioneer and Valuer colleagues this time around. The real winners though were the charities we supported. £5545 is a great total to raise. Well done to everyone involved.”

The organising committee ensured that a picture was taken that recreated the one taken from 1914 (shown above). No doubt now the two pictures will now hang proudly side by side on the offices of the firms involved. 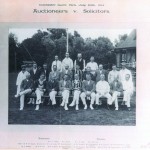 The original photograph of the Auctioneers V Solicitor cricket match. Taken in 1914.