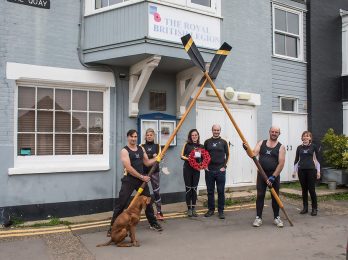 On Saturday 5 December Jolyon Berry, Solicitor and head of the Employment team at Thompson Smith and Puxon will be joining his team mates of The Wivenhoe Corsairs in a sponsored charity row raising funds for the British Legion.

The Corsairs, Wivenhoe’s coastal racing club, will be are raising funds for the Royal British Legion by undertaking a three hour coastal row down the Colne Estuary where they will then row in the shape of a giant poppy followed by a remembrance wreath laying ceremony, before rowing back to Wivenhoe as the sun goes down. The row will be tracked by GPS and will be available online for people to follow.

The crew for the row are members of the Corsairs with close connections to the Armed Forces, either through relatives or as veterans. Thompson Smith and Puxon has the Military Covenant Bronze Award under the Employer Recognition Scheme (ERS) and has made a pledge to support the defence and armed force community. TSP Director Jolyon Berry is formerly of the Royal Tank Regiment.

The Corsairs Poppy Row has raised over £1,200 so far for the Royal British Legion and hope to raise even more in the build-up to the event. Originally planned for Saturday 7 November the event has been rescheduled until Saturday 5 December to comply with England’s current lock down.

Thompson Smith and Puxon are pleased to support this event and wish The Corsairs the best of luck in their challenge! To make a donation you can visit their donation page here.