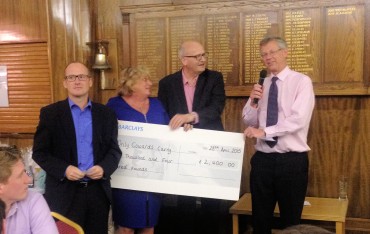 More than 20 teams of 6 (representing businesses from across the region) took part in a fun quiz evening at Frinton Golf Club on Tuesday 28 April 2015. The quiz was jointly hosted and organised by Thompson Smith and Puxon Solicitors (TSP), Jamesons Accountants and Barclays Bank, with Barclays agreeing to match the amount of money raised on the evening up to a maximum value of £1,000.

After a tightly-fought contest the winners on the evening were Team Fabulous, a team put together by Colchester Heritage BNI, closely followed in second place by TSP’s very own “The Firm” – a team made up of Mary Anne Fedeyko, Director and Corporate and Commercial solicitor, Alison Cantor, Family Law solicitor, Judith Winward, Dispute Resolution solicitor, Richard Porter, Director and Employment solicitor, Imogen Grainger, Trainee solicitor, and Marie Price, who helps look after the firm’s quality and compliance.

The evening raised a total £1,400.00; after adding the £1,000 pledged by Barclays a cheque for the sum of £ 2,400.00 was presented to Caroline Shearer (pictured 2nd from left) of Only Cowards Carry (OCC) by (left to right) Rob Gall of Barclays, Alan Brown of Jamesons and Richard Porter of Thompson Smith and Puxon.

About Only Cowards Carry www.onlycowardscarry.org

Only Cowards Carry Weapons Awareness was founded in November 2012 by Caroline Shearer in memory of her 17 year old son Jay Whiston, who was fatally stabbed in September 2012.

Continually driven by the devastating loss of Jay, Caroline and the team have worked tirelessly to promote Only Cowards Carry Weapons Awareness in the hope that young people understand the stark facts and devastating, life changing, true reality of knife crime. Caroline began to investigate education given to children at school, and discovered that although children were being taught internet safety, road safety and even sex education from as young as 7 years old, there was no provision for Weapons Awareness education.

Only Cowards Carry Weapons Awareness was given full charity status and within the first 2 years over 22,000 students, parents and teachers have requested OCC’s unique and engaging Weapons Awareness programmes. The charity continues to grow and now works in partnership with Essex Police, MPs, Crimestoppers and other crime prevention organisations.

OCC delivers powerful messages that also helps to reduce alcohol and drug misuse, and gang culture, and to increase parent and teacher awareness.