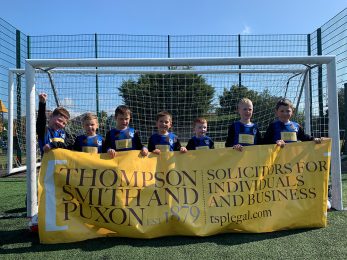 Thompson Smith and Puxon (TSP) is delighted to be sponsoring the Bergholt Heath Youth Football Club Under 7’s Reds team for the 2019/20 season.

Shelley Cumbers, TSP Family and Divorce Solicitor, who is local to West Bergholt, has recently been appointed as the club’s Fixtures Secretary and her son Parker (pictured proudly wearing his new shirt!) is a player in the Under 7’s Reds team.

Shelley says, “On behalf of the club, I would like to thank TSP for their generous sponsorship this year. This has enabled us to purchase new kits and equipment for the team. I am very excited for the year ahead and can’t wait to see the children play their first season of league football having trained in the academy for the last two years. They’re a fantastic bunch and I’m sure they’ll have fun trying to score lots of goals!”

Bergholt Heath Youth Football Club is an FA charter standard club that has been running youth football in West Bergholt since 1999. The club plays in leagues, cup competitions and fixtures organised by the Colchester and District Youth League. Children over a range of ages enjoy training and playing matches for the club, from 4 and 5 year olds just starting out in the academy to teenagers competing in league matches.

You can find out more about the team here.

Good luck to the team for the season ahead from everyone at Thompson Smith and Puxon!