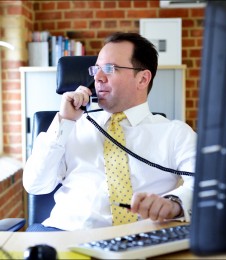 TSP’s Chief Operating Officer (COO), Sean Stuttaford, was recently interviewed for the Legal Practice Management Magazine (July 2016 edition). Sean talks about his early career and how he has progressed to where he is today.

“I know it’s unconventional, but my career actually began in electrical and electronic engineering, for the Home Office, and as a civilian on US Air Force bases.

I’d been in the air cadets, as a glider pilot and parachutist, and originally wanted to join the RAF but the “fast track” route I’d hoped to pursue, entering the service in a technical grade, had been abandoned by the time I was through Sixth Form. The US Air Force bases therefore presented the next best local opportunity for me to follow my interests in both electronics and aviation.

Due in no small part to the cold war ending, the US started to mothball the local installations so civilian civil servants, like myself, needed to change roles. My next move was effectively a continuous service transfer to HM Prison Service within penal installations. This is how I ended up working with young people.

Part of the job was to have an inmate shadow you while you did your day to day job, helping them to learn valuable skills and aiding in their rehabilitation. I took a keen interest in this side of my role and through a combination of retraining and some volunteer work I eventually successfully applied to become a lecturer for City College Norwich, but still working within the walls of a category C prison.

I taught and mentored young offenders in a combination of information technology and business administration. Some of them were working towards formal qualifications, others, possibly, just passing the time. Either way, I hope I was able to impart enough skills so that following their sentence they’d be able to find work or at least demonstrate an ability and willingness to learn. A good while later I was lucky enough to meet an ex-student of mine in a local town centre. He had been convicted of burglary at the time we first met but had gone on to undertake further training once he’d served his sentence and was now working in IT. It was great to think that I was able to have such a positive influence on another person’s life.

After a couple of years, I moved into the charitable sector and started working for the YMCA. I mainly worked with teenagers, finding them work placements and mentoring them in business administration and IT, as well as helping train them towards their qualifications. These days I suppose they would be called modern apprenticeships.

In the late 90s, there was an opportunity to apply for a role as a trainer for an Ipswich law firm. I have to be honest and say that the move was mainly motivated by a need to pay my 10% APR mortgage… but I had connections with the law and at the time a conventional office life also appealed.

I was at the firm a very short time before the unexpected departure of my manager combined with the mix of skills I had picked up during my career meant that I quickly moved into the role of IT manager. I confess that it was a bit daunting – I was only 25 at the time – but that was my first foray into a law firm management role and it was most definitely a sink or swim moment.

After a few years the large infrastructure and case management project that I had implemented for the Ipswich firm neared completion. The firm’s IT requirements were moving towards more of a “caretaker” role, outsourcing was certainly a threat, so it was time for me to move on.

I joined Thompson Smith and Puxon (TSP) as IT manager in 2001 and have spent the last 15 years with the firm. It was a time when everyone was setting up case management systems and a large part of my role involved training employees and changing the firm’s culture to effectively get the new IT infrastructure and software in place. There was a lot of resistance to the technology at the time, hard to imagine these days I know, but the Partners just did not want PCs on their desks. Although I was appointed as the firm’s only IT specialist the projects ahead were substantial and too large for one person. I was fortunate enough to be shortly followed by an ex-colleague from my previous team and together we set to work on systemising much of TSP’s operations.

In early 2004 the firm’s CEO moved on to work for the Law Society leaving a large gap in the organisation and administration teams. In the short time we had worked together the CEO and myself had formed a tight team and I was presented with an opportunity to take over the management of the firm’s administration functions as Operations Director.

I suppose, to a certain extent, I was in the right place at the right time, but I think good fortune plays a part in a career as much as hard work does.

The next four years were extremely testing, there were lots of successes and some disappointments, but, the next junction in my somewhat meandering career path was possibly due in no small part to the 2008 recession.

Like many other businesses in the UK, TSP could see that the industry faced difficult economic times. The Directors of TSP had identified that we needed to change with the market, the industry and our clients.

To do this we could see a new way of managing the business and some new skills were needed; this led to me attending Nottingham Law School in 2009 to undertake a PGD and then an MBA in legal practice management.

After completing the PGD in 2010 I was promoted into the role of Chief Operating Officer. The tools and knowledge gained from that qualification, and my successful completion of the MBA, have genuinely revolutionised our practice, performance management, culture and the client experience. I also firmly believe that it helped us get through the recent lengthy recession with very few adverse effects. It seemed to us that while our competitor regional firms were perhaps consolidating, we were taking bold decisions with rebranding, relocation and personnel acquisition across the firm.

TSP was established in 1879 and it has many of the good qualities you would expect from a historic family-led business – but this has not hindered its appetite for change. The directors have been remarkably progressive, handing such influence to a non-lawyer “manager” like myself. My brief was quite simple, I was asked to “take us out of our comfort zone and help us move on and become what we need to be for continued success over the next 20 years.” They’ve been incredibly supportive throughout all of the challenges that we had to meet to accomplish that. In a firm like TSP it is just not possible to successfully implement change without the business owners’ buy-in. In this regard they have embraced the unconventional with our branding, website and management tools as well as bringing team members along with us…. in short, they have tolerated me pushing conventional boundaries.

Overall, it’s been a team effort that has been mostly accomplished with consensus and little friction. By that measure our past six years are to be looked back on fondly, but mostly to be used as a foundation for the inevitable further change that legal practices face.

The full copy of the July 2016 edition of Legal Practice Management Magazine can be downloaded here.

A warm TSP welcome to Helen

Thompson Smith and Puxon is pleased to announce the appointment of Helen Geldart as a...
Read more...