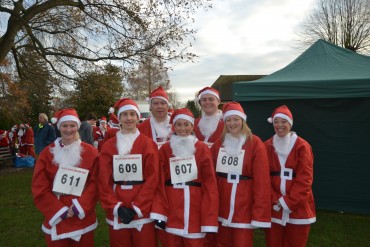 TSP is pleased to report that the firm will once again be entering a team of Santas into the annual Santa Fun Run, organised by Colchester Hospitals Charity, CoHoC, which is taking place in Castle Park from 10 o’clock this coming Sunday, 7 December 2014.

Santas can run either the 5km or the 3km course. Most of the TSP Santas will be running the 3km course with the exception of dispute resolution solicitor Craig Fiddaman who will be running the 5km race in preparation for his entry into the Virgin London Marathon next April. Other team members are Steve Webb, Julie Webb and Clare Sheeran representing TSP’s Personal Injury and Clinical Negligence teams, Will Quince representing Residential Property and Emma Cherry representing the Wills and Estates team.

To support its team of jolly Santas, and in lieu of sending Christmas cards to clients and contacts this year, TSP will be donating £250 to CoHoC, who this year are raising funds for the cancer centre at Colchester Hospital.

TSP Director Mary Anne Fedeyko said “Good luck to all of our TSP Santas. We hope they all enjoy the run and that their beards don’t get in the way!! The firm is really pleased, not only to be able to support the team, but also to support the invaluable fund raising efforts of the Colchester Hospitals Charity.”

A £4.5 million fundraising campaign by Colchester Hospitals Charity to build a world-class cancer treatment and wellness centre at Colchester General Hospital for the people of mid and north east Essex.

Anyone who has had cancer knows the physical and emotional impact can leave you feeling alone and afraid for the future. The new Cancer Centre will combine world-class treatments with complementary therapies in a soothing environment. Donating to the campaign will help bring comfort and relief from the anxiety and pain of living with cancer to people in mid and north east Essex. You can donate here

Last year’s band of TSP Santas are pictured in Castle Park before the fun run.