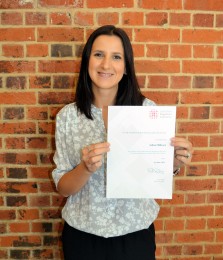 TSP has added another solicitor to its ranks. Adina Milleare (formerly Erbicianu). who joined TSP in July 2013 as a trainee, qualified as a solicitor on 1 June 2015.

During her training Adina has undertaken seats in Wills and Estates, Residential Property (spending time at our Clacton office) and Corporate and Commercial, undertaking her final seat in the Dispute Resolution team, under the supervision of Julian Wilson. Adina will now work with both the firm’s Dispute Resolution and Corporate and Commercial teams.

Adina, who is Romanian by birth (and brings fluent written and spoken Romanian skills to the firm) has lived and worked in Colchester all her adult life. She studied for her LLB in Law and Human Rights at the University of Essex, graduating in June 2011, and went straight on to pass her Legal Practice Course with Distinction in June 2012.

TSP HR Director, Richard Porter, said “Our Graduate Recruitment Programme continues to bear fruit. As a firm we are committed to supporting our trainees and keen to invest in the future of the firm. We are a firm in which younger lawyers can obtain a wide experience of legal practice and develop their expertise in a chosen area of the law within an encouraging and mentoring environment. Adina will be a valuable addition to the firm and on behalf of TSP I wish her every success in the future”.

Our trainees are recruited two years in advance. Applications to join the beginning of the process are open as follows and will close on the following dates:

Applications in the form of a CV with covering letter, should be submitted online here.