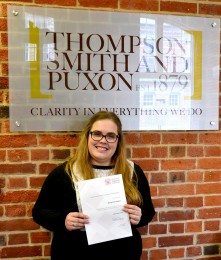 TSP has added another solicitor to its ranks. Imogen Grainger, who joined TSP in September 2014 as a trainee, was admitted as a solicitor on 3 October 2016. During her training Imogen has undertaken seats in the Residential Property department at the Clacton office, and the Wills and Estates, Litigation and Family teams, based in the Colchester Office. Imogen is now working in the Family team.

Imogen, who was brought up locally, attended Rossall School, Lancashire, between 2000 and 2005 on an Academic Scholarship before going on to take her A Levels at the Sixth Form College, Colchester.  She was presented with Outstanding Academic Achievement Awards by both her school and college. She completed her Law and Human Rights degree in Colchester at the University of Essex and went on to complete her Legal Practice Course at The College of Law, London.

TSP Chief Operating Officer, Sean Stuttaford, who manages the TSP Trainee programme, said “We are a firm in which younger lawyers can obtain a wide experience of legal practice and develop their expertise in a chosen area of the law within an encouraging and mentoring environment. On behalf of the directors and staff of TSP I wish Imogen every success in the future”.

Our trainees are recruited two years in advance. Applications to join the beginning of the process are open as follows and will close on the following dates:

Applications in the form of a CV with covering letter, should be submitted online here.

TSP is keen to develop talented students who wish to have a long-term career as a solicitor in Colchester and its locality.  Details of the Prize and the criteria for application can be viewed and downloaded by clicking here.