Neighbour borders – how to stop a boundary wall becoming a battle line. 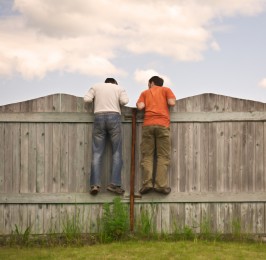 How well do you know your neighbours? We jealously guard our domain, carefully marking out our borders and ensuring that nobody encroaches on our ‘personal space’.

Boundary disputes between neighbours can be some of the most fiercely contested and ugly conflicts in modern society. From someone’s fence being a couple of inches over their boundary to overhanging trees, high hedges or fences or the dreaded Public Footpath across private land, it seems there are a multitude of ways to annoy the neighbours without saying a word. Let’s have a look at the guidelines around boundary disputes, and how to resolve them.

Drawing the line – where are boundaries recorded?

You will usually find your property boundaries marked out on your deeds. However, with older properties the lines can get a little blurred over time and it can be difficult to precisely know who owns a hedge, fence, or trees between two properties. Walls are often a little easier to determine, but even these can be the subject of disputes if there is no precise indication as to where the original wall should be.

The boundary of a registered estate as shown is a general boundary and does not determine the exact line of the boundary. However, in many cases, the documents cannot be relied upon to show the precise boundaries. Plans may be for identification purposes only, and may be too inaccurate for any use other than general identification of the areas of land in question. Where a precise boundary cannot be identified from the title documents, they will almost always have to be supplemented by other evidence, including inferences drawn from the physical features of the land at the time the deeds were executed. The effect of a conveyance is not determined by evidence showing what the parties to the deed subjectively believed it meant, but by what they would reasonably have understood it to mean against the relevant factual background. Additionally rights may be acquired over a period of time.

These are often the cause of real vitriol between warring neighbours, especially if a hedge starts to get out of control. There are regulations for how high a natural hedge can be and local authorities have some statutory powers, but usually charge a fee to consider a complaint.

Sorting the problem out

Neighbour disputes over boundaries and overgrown trees fall under civil law, so unless things degenerate so badly that you feel physically threatened then there’s absolutely no point in calling the Police to settle an argument. They will not respond to neighbourly disputes over a boundary argument.

The best way to resolve the situation is to talk. Emotions can run high, so if the situation has really escalated out of control then you can call in a mediator who can talk to both parties and get them around a table. Mediation is a really effective way of seeking to resolve these disputes without it escalating into legal action.  You can also instruct a surveyor to attend the site and demarcate the boundary; it is better to do so jointly with your neighbour and agree to be bound by the report in order to avoid further disagreement.  You can call in a solicitor who specialises in boundary disputes and property law. They’ll be able to research the boundary and try to find an exact and defining map to show exactly where the line is. Remember that no matter what happens, you’re still going to have to find a way to live with each other after the dispute is over, so mediation is by far and away the best route to tackling a boundary dispute and resolving the situation amicably.

If you have any concerns in respect of a boundary dispute, or any other type of dispute, the Thompson Smith and Puxon Dispute Resolution team can help. For more information the team can be contacted on 01205 574431 or by email at info@tsplegal.com.