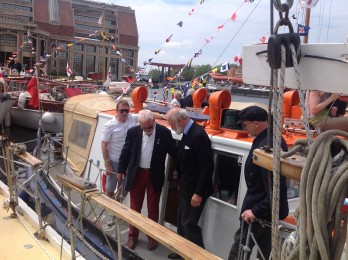 On Thursday 21 May 2015 a flotilla of ‘Little Ships’ that evacuated Allied troops from the beaches of Dunkirk in 1940 sailed across the Channel to mark the 75th Anniversary of the rescue.

TSP’s Mary Anne Fedeyko was on board her family’s boat ‘Stenoa’, a former lifeboat, and made the trip along with around 50 other boats, including RNLI and Royal Navy vessels, as well as fishing boats and other privately owned craft.

The convoy set sail from Ramsgate to recreate the voyage that saved more than 300,000 British, French and German troops.

Hundreds of well-wishers lined the harbour walls in Ramsgate as the boats began their journey. The fair winds meant Stenoa was able to sail almost the whole journey across the Channel.

Spitfire and Hurricane aircraft from the Battle of Britain performed a memorial flypast overhead during the voyage.

The following day in Dunkirk, Mary Anne and her family were honoured to host a lunch for HRH Prince Michael of Kent and his associates aboard Stenoa.

Over the course of the weekend, the fleet saw many commemorative events which included a service at the British Memorial at the Dunkirk Military Cemetery and an official service at the Allied Beach Memorial. A number of veterans were present in Dunkirk and attended these events.

On Monday 25 May the Little Ships set sail on their return journey. However they encountered unexpectedly high winds and heavy seas, and the commodore suggested all Little Ships concerned about the conditions turn back. Fortunately, Mary Anne, her family and Stenoa were able to continue and complete their voyage, which meant they were able to welcome the other Little Ships when they returned to Ramsgate the next day.

Mary Anne said: “The whole event was incredibly moving – from the flypast, to the sight of the very plucky smaller boats forging across the Channel, to the veterans attending the various services. We all felt honoured to be able to participate in and be part of this wonderful commemorative occasion.”

Dunkirk 1940
The Dunkirk evacuation which was code named Operation Dynamo was the evacuation of Allied soldiers from the beaches and harbour of Dunkirk, France between 27 May and 4 June 1940.

British and French armies had been cornered by the advancing German army and Vice-Admiral Bertram Ramsey masterminded Operation Dynamo with the aim of rescuing around 50,000 troops, yet on the 4 June, Winston Churchill announced to the House of Commons that 338,000 soldiers had been rescued, despite the operation coming under attack.

In May 1965, to mark the 25th Anniversary of Operation Dynamo, Raymond Baxter (the famous radio and TV presenter) organised and assembled a fleet of 43 of the original Little Ships of Dunkirk to recreate the journey. After the first commemorative voyage, it was decided that such a unique assembly should not be allowed to disperse into obscurity and the Association of Dunkirk Little Ships was subsequently formed in 1966. Along with various other events to commemorate the Dunkirk spirit, every 5 years the Little Ships return under their own power to Dunkirk.

For more information on the Association of Dunkirk Little Ships please click here.