Little Ship in Preparations to Return to Dunkirk 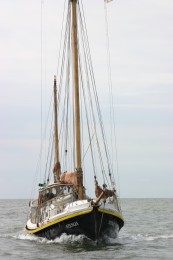 Mary Anne Fedeyko, who leads the Business Services team at Colchester and Clacton-based Solicitors, Thompson Smith and Puxon (TSP), is preparing, with her family (the Dansies), to sail their Dunkirk Little Ship, Stenoa, across the Channel to commemorate the 75th anniversary of the evacuation of Dunkirk in 1940.

Stenoa, previously named the Cecil and Lilian Philpot, was one of a fleet of 700 private vessels who, in 1940, came to the aid of more than 338,000 British and French soldiers trapped on the beaches of Dunkirk during Operation Dynamo.

In 1965, Raymond Baxter, the famous broadcaster, organised and assembled a fleet of 43 of the original Little Ships to return to Dunkirk and commemorate the 25th anniversary of the evacuation. Every 5 years since then the Little Ships, supported by the Royal Navy, return under their own power to Dunkirk, and this year, the 75th anniversary of Operation Dynamo, an official invitation has been received from the Mayor of Dunkirk for the Little Ships to return once more.

It is expected that over 50 Little Ships will gather in Ramsgate and take part in the Ramsgate D Day celebrations on Wednesday 20th May. They will then depart for Dunkirk on Thursday 21st May, escorted by the RNLI and the Royal Navy, with a flypast by Spitfire and Hurricane of the Battle of Britain Memorial Flight.

Mary Anne said “Over the past 45 years, Stenoa has been a much-loved member of the Dansie family. She was built in 1929 and from 1930 to 1959, she was in service as a lifeboat in Newhaven. She saved a total of 51 soldiers in the Dunkirk evacuation and, even though she was rammed and almost cut in half, she managed to survive. After she was decommissioned, she served in the reserve fleet in lifeboat stations along the coast. My husband Tim’s father, Oliver Dansie, bought her in 1969 when she was called the Cecil and Lilian Philpott. When they retire from service with RNLI, you have to change their name – she was renamed Stenoa from the initial letters of the names of the family – Oliver, his wife, Anne, my husband, Tim, his sisters Sarah and Elizabeth and his brother Nicholas.”

Oliver worked on Stenoa to convert her to a more family-friendly vessel. He replaced the petrol engines with diesel ones and created a galley and sleeping areas. A variety of sails were introduced over the years with the current sail pattern put in place in 1999. The family has spent many pleasurable hours sailing along the scenic Walton backwaters and beyond to the Suffolk coast, across to Holland, France and down to the Channel Islands.

Mary Anne added “Every weekend when my three girls were small, we would go down to Stenoa on a Friday night and sail until Sunday evening. My eldest daughter, Susanna, was only two weeks old when she first went on her.”

In 2012, Stenoa took part in the Avenue of Sails on the River Thames as part of the Queen’s Diamond Jubilee celebrations. Mary Anne said “We were going to raise the sails as the Queen travelled down the Thames, but unfortunately the weather was so bad on the day that the organisers had to abandon this idea. We were still in the thick of it though and it was a really memorable occasion.”

Mary Anne’s husband Tim added “The family are really looking forward to taking Stenoa across the channel on 21st May as part of the celebrations. Stenoa has taken part every 5 years since 1965, but this trip will be very special. There will be about 14 of us in total, including myself and Mary Anne and two of our daughters, Susanna and Katherine. We are all very much looking forward to it – let’s hope the weather is kind to us!”

“Stenoa is now in her 86th year and keeping her in shape does take a lot of work but it really is worth all of the effort.”

The Dansie family (which includes Stenoa!) are members of The Association of Dunkirk Little Ships. Membership means that Stenoa has the right to wear the Association’s warranted House Flag, the Cross of St George (the flag of the Admiralty) defaced with the Arms of Dunkirk. Little Ships are also entitled to display a plaque marked “DUNKIRK 1940”.

For more information and a timetable of the events taking place in both Ramsgate and Dunkirk please click here to visit The Association of Dunkirk Little Ships website. 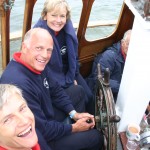 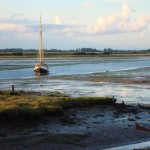 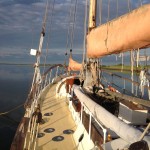 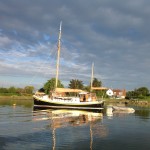 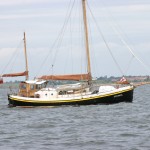 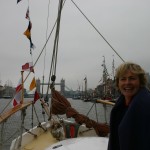