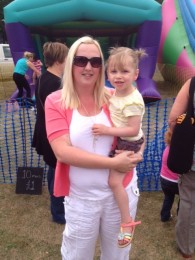 The inquest into the death of Mrs Joanne Norris, presided over by HM Assistant Coroner for Essex, Ms Michelle Brown, opened today at the Coroner’s Court in Chelmsford.

Mrs Norris, described by her husband as a beautiful wife and a fantastic mother, died on Sunday 16 March 2014 after she jumped in front of a train at Witham railway station. Joanne was 28 years old when she died and was expecting her second child, a boy, whom Mr and Mrs Norris had named Jack. The baby’s expected delivery date was 21 April 2014.

Joanne and her husband Jeff had been together for ten years at the time of her death and married for five, with a three year old daughter. Joanne worked as a teaching assistant at Tendring Technology College.

Joanne had, since the age of 18, suffered from anxiety and was treated with a long-term prescription for anti-depressants. This medication was stopped by her GP when Joanne discovered she was pregnant.

During the course of her pregnancy Joanne became increasingly low and anxious and at an appointment with her midwife a week before her death was tearful and told the midwife that she was not coping. The midwife made an appointment for her to see Health in Mind but this appointment was three weeks away.

Unfortunately over the next few days Joanne’s mental health deteriorated and on the day she died Joanne telephoned the Crisis Team in the morning and spoke to a Community Psychiatric Nurse. She told the Nurse that she had been thinking about jumping in front of a train. The Nurse arranged to visit her at home later that day. Before the Nurse arrived Joanne drove to Marks Tey station (23 miles from her home), parked her car, and boarded a train to Witham. She waited on the platform and jumped in front of a train as it was pulling into the station.

An investigation into Joanne’s death by North Essex Partnership NHS Foundation Trust, the Trust responsible for mental health services in the area, highlighted various areas of her care that were of concern. The report containing the findings of the investigation acknowledged that ‘there appeared to have been reliance on Mrs Norris to self refer to appropriate services, rather than be referred on by professionals, which given her presentation and previous history may have led to a more robust response to her mental health needs’.

Colchester Hospital NHS Foundation Trust who were responsible for the midwifery services provided to Joanne during her pregnancy also undertook an investigation which concluded: ‘this was a tragic death of a young woman and her unborn baby, which, although may not have been preventable, suggests that care may not have been provided to a standard that could have helped to avoid this untimely death’.

Naomi Eady, Clinical Negligence Solicitor at Thompson Smith and Puxon who is representing Mr Norris at the Inquest, said ‘it is of great concern to Joanne’s family that both investigating Trusts are critical of the care she received on a number of different levels.’

At the conclusion of the Inquest the same day Assistant Coroner Michelle Brown concluded that Mrs Norris’ death was suicide. However, based on the evidence presented at the Inquest Joanne’s husband Jeff will be pursuing a clinical negligence claim.