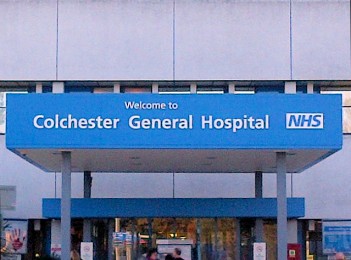 Data from NHS Digital has revealed that last year Colchester General Hospital had 345 more deaths than was expected.

The data, presented in NHS Digital’s publication ‘Summary Hospital-level Mortality Indicator (SHMI) – Deaths associated with hospitalisation’ shows that East Suffolk and North Essex NHS Foundation Trust, which provides services for Colchester Hospital and Ipswich Hospital, was found to be one of 11 trusts with a higher than expected number of deaths in January to December 2018. This was out of 130 trusts included in the report.

The figures for the East Suffolk and North Essex NHS Trust showed 4,585 deaths were recorded and 4,035 had been expected, which means there were 550 more deaths than expected.

The report shows that at Colchester General Hospital 2,450 deaths were recorded when it had only “expected” 2,105, meaning there were 345 more deaths than expected.

This follows on from 2017 when Colchester Hospital was also found to have higher than expected death rates. (Source: NHS Digital)

It should be noted that the SHMI is not a measure of quality of care, and a higher/lower than expected number of deaths should not immediately be interpreted as indicating poor/good performance. It is said, however, that it should be viewed as a ‘smoke alarm’ which requires further investigation.

The Trust’s chief medical officer, Angela Tillett, said: “We are committed to learning any lessons that have arisen from any aspect of care that has caused a patient harm or resulted in their death.

We constantly review the quality of care we provide to all of our patients and the period in question was particularly difficult as we experienced one of the worst winters for many years.

We recognise that we have a higher proportion of elderly people in certain areas who have multiple conditions which can worsen in the cold weather.

We are working closely with our GP and community partners to support our patients with long term conditions and in providing end of life care according to the patient’s wishes.”[ (Source: Daily Gazette)

Stacey Anderson, Chartered Legal Executive in the TSP Clinical Negligence Team, says “Whilst it is made clear in the report that the SHMI is not a measure of quality of care, it has been said that it should be viewed as a ‘smoke alarm’ which requires further investigation.  It is a concern that Colchester Hospital has fallen into the category of higher than expected deaths both in 2017 and 2018 and it is hoped, if any of those deaths have arisen out of possible substandard care, that those deaths have been fully investigated by the Trust. If you have any concerns about the death of a loved one, during or following a hospital admission, and you wish to discuss those concerns, please do not hesitate to contact a member of our team.”

Stacey Anderson can be contacted on stacey.anderson@tsplegal.com or by telephone at 01206 217047.