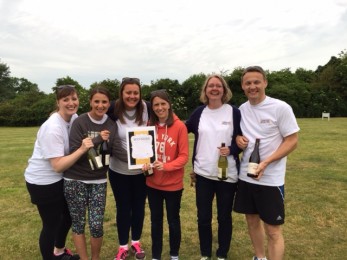 On Friday (10 June 2016) a team of six Thompson Smith and Puxon competitors entered the Fiducia Charity Challenge. This involved taking part in an array of sporting and team activities in aid of the Rob George Foundation. We are proud to say that the TSP team were victorious as the winners – well done team!

The fun packed event was run by Fiducia Wealth Management who are an independent firm of financial advisors offering advice on all aspects of financial planning and investment management. The event was held at their Dedham premises and was a evening of sporting and team activities including: football target, egg and spoon race, spaghetti tower and the space hopper challenge.

The Rob George Foundation was set up in 2013 after Rob, from Colchester, lost his battle with Leukaemia. The charity aims to provide practical and financial support for young people with life threatening illnesses. They also provide financial support for young people who demonstrate exceptional commitment and ability in the world of sport and performing arts but are held back by their financial position. www.therobgeorgefoundation.org