Chris Philpot: Trek to the North Pole in April 2018 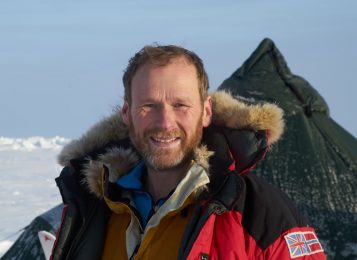 On the evening of Wednesday 22 May TSP Director and Wills and Estates Solicitor Fiona Ashworth attended a talk given by Chris Philpot on his recent trek to the North Pole. The event was organised and hosted by the Essex Agricultural Society at Writtle College. Here Fiona updates us on the evening.

Having already survived an expedition to the South Pole in 2016, a farmer from Billericay in Essex, Chris Philpot, decided to test himself further by trekking to the North Pole in April 2018.

Chris was part of a team of six whose North Pole expedition started in Longyearbyen, Svalbard. As the plane headed towards their journey’s start point Chris was enthralled to see the sunrise at midnight, before the plane made its landing in “seriously” icy conditions, with the snow falling -“nothing like that would happen in the UK” was Chris’ verdict!

Longyearbyen is the most northern town in the world, with a population of just 2,144, and where no births or deaths are allowed. If you are pregnant, or over 60, you have to leave for Oslo. It is famous for housing the Global Seed Vaults where reportedly every seed in the world known to man is frozen and stored. It also has a famous coal mine on the side of a mountain and which is still active today, although all coal travels in buckets on cables to the power station as there is no transport there.

From Longyearbyen a Russian helicopter took them to Camp Barneo, a place 89o North, but unfortunately this turned out to be too far north so they then had to make a 2 hour trip further South to make sure they covered their full distance.

The trek across the sea ice to the North Pole was carried out over 7 days in temperatures averaging -30oC. Chris talked us through the clothing requirements for the trip, particularly as all parts of the body had to be covered to prevent frost bite. The air was very damp and it was very difficult to keep dry. Chris also talked about the one person in the group who stood out for him. Chris described Rune as his ‘hero’ – a quiet and unassuming man, even though he had crossed both the North and South Poles on skis, unsupported.

Chris described the snow as “all different shades of blue and white”, with the newest snow being the whitest. The noise of ice cracking and moving all around them was not insignificant and they encountered two large icebergs, a rare sight so far North. The view from the top of these icebergs was amazing and the scenery immense.

Chris told us how surprised they all were to find that, according to the compass reading at the end of the  trip compared to the start, Camp Barneo had moved about 24 miles during the course of the seven days it took them to get to the North Pole and back.

At the end of the trip the Russian helicopter came to pick them up and it was a door to door service, literally, as it landed almost right on top of them! Chris reported that Russia is becoming very keen to run trips to the North Pole and rumour has it that one multi-millionaire, a purported friend of Vladimir Putin, went by submarine to the Pole to plant a Russian flag!

To sum up, one word that struck me following Chris’ presentation about his recent escapades was ‘Endurance’. His ability to withstand stress, pain and fatigue over a lengthy period of time was, in my opinion, quite phenomenal and the level of fitness required to take on this challenge is to be respected; not many farmers can say that they have walked to both ends of the earth.

Over the course of this trip Chris has raised just over £13,000 for the Essex Air Ambulance and Prostate Cancer through his ‘just giving’ page and other sponsors and is extremely thankful to all who supported him.

Fiona has extensive experience in the often complex law and tax rules surrounding trusts, estates and inheritance. She is also a member of the Agricultural Law Association and her farming background (she is a farmer’s daughter and married to a farmer) has helped her to develop an agricultural client base which she advises on estate planning and farming family succession. Fiona can be contacted on fiona.ashworth@tsplegal.com or by telephone at 01206 217057.