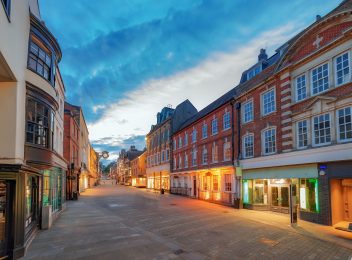 With very few exceptions, high streets have continued to struggle due to:

The Local Data Company reported in 2021 that 8,739 shops had closed in the first six months alone with fashion retail being the hardest sector hit.

The Government is taking action to rejuvenate empty high streets and town centres. First introduced as part of the “Levelling Up White Paper” published on 02 February 2022, a further step will be taken forward to tackle the issue during the Queen’s Speech on 10 May 2022.

The Queen will announce the forthcoming Levelling Up and Regeneration Bill (“the Bill”) that will provide increased powers to local authorities to force landlords to rent out commercial properties and to exercise compulsory purchase orders on empty properties to use them for public benefit and there will also be a new Compulsory Rental Auction Scheme to prospective tenants to properties which have stood vacant for over a year.

It is also expected that the Bill will allow local authorities to double council tax rates on empty second homes as well.

In a press release given on 07 May 2022, Prime Minster Boris Johnson stated:

“High streets up and down the country have long been blighted by derelict shopfronts, because they’ve been neglected, stripping opportunity from local areas.

“We are putting that right by placing power back in the hands of local leaders and the community so our towns can be rejuvenated, levelling up opportunity and restoring neighbourhood pride.”

Businesses will also benefit from £1.7 billion of temporary business rates relief in 2022 – 2023 for those properties dealing in retail, hospitality and leisure.

Since the Bill is very much in its infancy, it remains to be seen, until the various provisions of the Bill are detailed, as to how such measures will come into effect and a longer time still until such measures will really have an impact upon the high street. It also raises an interesting question as to the extent to which local authority intervention should be permitted into the commercial rental sector and even with such schemes in place, whether the interest is out there to breathe new life into vacant properties given the increasing demand for the online market and desire to reduce overheads. However, local communities who have seen their high streets deteriorate over the last few years will undoubtedly welcome the measures.

If you need any advice regarding commercial properties including breach of tenancy, forfeiture and possession, the TSP Dispute Resolution Team can advise you on the best course of action and funding options.