Avoiding a Cracker of a Hangover from the Company Christmas Party 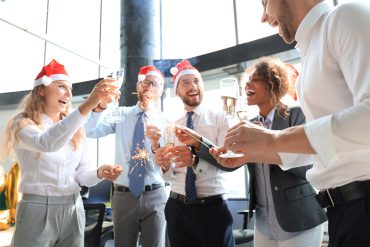 As the clock ticks down to Christmas party time, companies need to avoid the event becoming the wrong sort of cracker.

Any company-organised office party, whether in or out of working hours and on or off site, is an extension of the workplace which can test a business across the board on its policies and attitudes.

“It’s a test for the culture of the business and its staff policies,” explained Lisa Dixon, Thompson Smith and Puxon’s new recruit into their employment team. “Incidents that start after a few too many drinks at work, regularly end in the employment tribunal and as there is so much more Tribunal litigation than there was even this time last year, employers should take a bit of care and staff may need to be reminded of the boundaries and what is acceptable behaviour or that, simply, the office party is exactly that; an office party where standards of appropriate behaviour are expected to be upheld.”

A great risk for employers is being held vicariously liable for the misconduct of their employees at such events. While in July this year the Courts found that an employer is not liable for an employee sharing offensive images on Facebook as not being done in the course of employment.  However In the case of Bellman v Northampton Recruitment Ltd, the claim against the employer company by an employee who was left with long term brain injuries when the managing director hit him after a fight broke out at an unplanned party, was successful.  The company became liable for the assault.

In another case where the employer escaped liability, Shelbourne v Cancer Research UK, an employee had suffered serious back injuries after an over-excited colleague lifted her up at a work party, lost his balance and dropped her to the floor.  The employer had to demonstrate that rigorous risk assessments had been undertaken, and the court had to find that there was insufficient connection between the colleagues’ work roles and their actions at the party before the claim for negligence was dismissed.  These cases are complex and time consuming.

Jolyon Berry, Thompson Smith and Puxon (TSP) Employment Law Solicitor added, “Christmas parties can be the highlight of the year but the only hangovers should be ones from having over-indulged, rather than ones that continue into the New Year.”

“Unfortunately but perhaps unsurprisingly, aggression and sexual harassment are the most common forms of misconduct at these sorts of event. As well as the legal risks arising, such incidents can have a lasting impact on morale in the workplace too.”

For more information or advice on any other employment law issue, please contact the TSP Employment Law team on 01206 574431 or email info@tsplegal.com. Thompson Smith and Puxon has offices in Colchester and Clacton , Essex.