A Fond Farewell After 35 Years 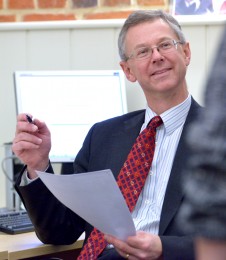 It is the end of an era at Thompson Smith and Puxon (TSP), as Richard Porter, third generation Porter and TSP Director, retires from the firm. TSP Directors and Staff came together at the firm’s Christmas party at Wivenhoe House on Friday 20 December to wish Richard, who heads the Employment Law team, a long, happy, and healthy retirement.

Fellow Director, Steve Webb, was called upon to say a few words. In summing up he said “Richard has three qualities that set him apart as a lawyer. Firstly, he is a perfectionist. Whatever he does he always does it to the best of his ability as his record shows. Secondly, he is the best natural advocate that I know – he is concise and persuasive, talking less, but saying so much more. Lastly, he is the perfect gentleman.” Steve and Richard are pictured together, left.  Richard responded, speaking fondly of his time at TSP, and how proud he is to have followed in the footsteps of his father and grandfather before him. After the speeches were complete Richard’s secretary, Julia Kingston, presented Richard with an Ipad and card on behalf of the Directors and Staff.

Richard passes the stewardship of a thriving Employment team, rated Top Tier in Essex by the Legal 500, and with a very healthy client base, to fellow director and Legal 500 leading individual Jolyon Berry.

Richard has helped many people and touched many lives during his time at TSP and he leaves us with our very best wishes for the future. You will be missed by us all Richard.

Richard was educated at Holmwood House Preparatory School and Charterhouse and joined the Colchester Royal Grammar School in the sixth form. He studied law at Anglia Ruskin University before undertaking his training contract at Stewards in Ipswich and then joining TSP in 1984, like his father and grandfather before him. He became a partner in 1987 and spent a number of years in our Clacton office, heading the team there. In 1997 he completed his Masters Degree in Law with the University of Leicester.

In his early years of practice Richard worked in crime and by 2000 was reputed to be the best defence lawyer in town. He was one of the first solicitors to be given higher rights of audience in the Crown Court, was on the Attorney General’s list of Special Prosecutors, and spent time as a Deputy District Judge dispensing the law, as well as defending his clients.

By 2000 Richard had done what he could with crime and turned his hand to Employment Law, bringing the same enthusiasm and vigour as he had with the criminal law. He is a member of the Employment Lawyers Association and a Legal 500 Leading Individual for his Employment work and under his stewardship the team had gone from strength to strength, being rate as a Legal 500 Top Tier Employment Team in Essex since October 2017.