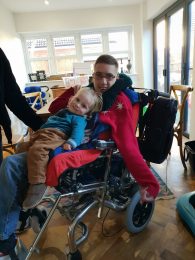 The 12th Annual Charity Quiz jointly hosted by Thompson Smith and Puxon (TSP), TC Group (formerly Jamesons) and Barclays was held on Wednesday 26 June at Frinton Golf Club. In the twelve years the quiz has been running, over £25,000 has been raised for local good causes thanks to the generosity and support of local businesses. This year the quiz took place in aid of Team Angus, inspired by client, Toby Wheeler.

Twenty three teams representing businesses across the region took part in the quiz, with TSP Director and Employment Solicitor, Richard Porter, as Compère for the fourth year. After a tightly fought contest of 10 rounds the winning team was The Lifehouse Spa and Hotel.

An enjoyable evening was had by all and the event raised a grand total of £2,603 including £1,000 of matched funding pledged by Barclays.

Thanks to all of the teams who attended and for helping us to raise much needed funds for Angus. Toby Wheeler and Angus are pictured.

Toby’s Story: Toby Wheeler is an exceptional young man in his twenties who has cerebral palsy. Despite his disability he is determined and focussed with a never-give-up attitude to life.

Earlier this year Toby organised a unique race for people with disabilities and TSP was pleased to sponsor the event and support Toby’s fundraising efforts – more here. Toby chose to raise money for Team Angus; having researched charities he was immediately drawn to Angus’ story and wanted to do something to help. He wants to make a difference to Angus’ life and inspire Angus to do incredible things.

Angus’ Story: Angus, like Toby, has cerebral palsy. Angus’ cerebral palsy was caused by a traumatic time at birth; he was born in 2017, in his parent’s car on the A120 and starved of oxygen for at least 30 minutes. His parents made every effort with CPR but feared the worse. The attending paramedics got Angus breathing again as they rushed him to hospital. He spent months in hospital fighting many battles. Angus is a brave and strong little boy with the most infectious smile. However, he needs therapies and equipment as he goes through life which the NHS cannot supply in the quantity needed to make a substantial difference to Angus’ life. Team Angus is raising money to fund the lifetime care that Angus requires. Toby understands the importance of equipment and physiotherapy programmes and was inspired to raise as much money as he can for Angus. He wants to make a difference to Angus’ life and inspire Angus to do incredible things.

In addition to the Wheeler Way Walk and the quiz, Toby also organised a Sky Dive – more here – and so far has inspired those around him to raise more than the modest £7,500 target he set himself back in January.

If you are inspired by Toby and touched by Angus’ story you can donate here.