Dying Matters: Are We Ready? 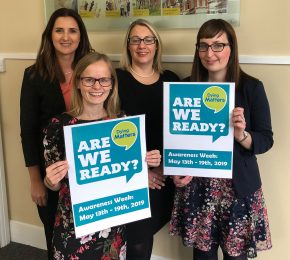 In 2017 figures published by the Office of National Statistics (ONS) revealed that the Tendring District had the highest death rate in the UK at 15.5 per 1000 people, (source: dailymail.co.uk) which means that 2242 will die this year, based on an estimated population of 144,700 (source: TDC). Each of those deaths will affect many more people in different ways.

This year, the Dying Matters Awareness week campaign challenges us all to answer the question “Are We Ready?” Taking place between 13th and 19th May, the campaign is designed to promote the importance of talking about dying, death and bereavement.

According to www.dyingmatters.org this is a question that challenges all of us on several levels. Are We Ready for our own deaths, or the deaths of those we care about? This is a practical question – Wills, funeral planning and more – but it’s also emotional, even spiritual for some of us.

Research suggests that most people haven’t taken care of the practical aspects, which includes making a Will, deciding on organ donation, and planning for future care. In fact a 2016 ComRes study, commissioned by Dying Matters, found that only 35% of British adults had made a will, and only 30% have discussed their funeral wishes.

At Thompson Smith and Puxon the team IS READY to help you get your affairs in order and would like to encourage you to take the first step by starting what can be a daunting conversation and getting the answers you need.

We are supporting Dying Matters week with a MEET THE TEAM event at our Clacton Office on Tuesday 14 May between 10:30 am and 2.00pm. Come along and TALK TO US. The Thompson Smith and Puxon team will be available to answer any questions you may have about:

We will also have team members from the Residential Property, Family and Dispute Resolution teams available for you to talk to as well. They all look forward to chatting with you…we promise it won’t be a difficult conversation!

This event, which is intended to give members of the public the opportunity to talk about death and ask any questions they have in an informal setting, is one of hundreds taking place across England for Dying Matters Awareness Week. You can find out about other events here. Fiona Ashworth who leads the Wills and Estates team at Thompson Smith and Puxon said “this is the second year that TSP has supported Dying Matters week because we think there is a need for it, particularly in the Tendring District. Talking about death can be a bit awkward at first, but it is something we all have to face. Talking about death makes it easier to plan for and to deal with when it happens.”