Clare Sheeran and Family Take on the Comic Hero Run 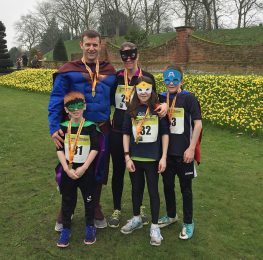 The idea of the race was to dress as your favourite comic hero and to run or walk the 1, 5 or 10km course in Colchester Castle Park all to raise money for St Helena Hospice. The race was originally scheduled to take place on Sunday 18th March but due to a yellow weather warning of snow the race had to be postponed! Clare took part in the race with her husband and three children, all running the 5km course. 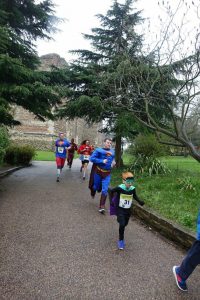 The family chose to take part in the race in memory of Clare’s mother who died of breast cancer in November and spent four weeks being cared for in the hospice. Their aim was to raise money so that others who find themselves facing life limiting illnesses such as cancer can benefit from the services at St Helena Hospice. Clare said “The hospice cared for Mum for just over four weeks and the care she received during that time was truly wonderful. We are very fortunate to have such a wonderful place in Colchester, but like all hospices they rely heavily on fundraising in order to provide their services. We hoped to raise as much money as we possibly could so that others can benefit from the amazing work that they do. ”

Despite the rain, the family all completed the race, with Clare’s youngest son finishing the race in a speedy 26 minutes. The team raised a fantastic £700 – well done Clare and family!

More information about the St Helena Hospice can be found here.