An Interview with a Medical Negligence Solicitor 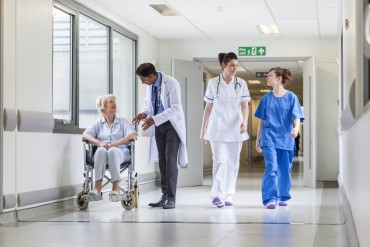 Steve Webb, a Medical Negligence solicitor at Thompson Smith and Puxon, discusses his role and explores the debate about the rights and wrongs of suing the NHS.

I am a Medical Negligence solicitor. This involves investigating things that have gone wrong with medical treatment and pursuing claims in respect of the harm and damage that have been caused as a result.

If I am successful in proving that a patient has been a victim of substandard care and that the care has caused serious injury or even death then there are a number of things that I can do. I can request an apology from the HCI; that they change their procedures; that they re-train staff. However, these are all optional – the HCI does not have to do them. The only thing I can guarantee, if a case is successful, is to make them pay damages to the victim or the victim’s dependants.  Hopefully, in the process of pursuing a successful claim, I will succeed in finding out exactly what happened and help to reduce the risk of it happening to someone else, which is often what clients are most interested in doing.

Most readers will be aware of the difficulties that continue to plague our local hospital. There are stories in the news all the time about the NHS deficit and the many healthcare crises that our country is facing, so how can it be right or ethical to sue this British institution? What do people really think about that?

It is a thorny issue and before I enter into the debate I want to point out that I don’t think there is necessarily a right or wrong answer. It is very much about personal opinion and experience. Everyone will have their own views. However, as you would expect, I believe very strongly in what I do, and that the access to justice that the current system allows is extremely important for victims of terrible medical accidents. What I do find is that people’s attitudes depend, to a certain extent, on their understanding of the legal system but more so on their own experiences. Many will have doctors or nurses or other health care professionals in their family or circle of friends and will know that those people work very hard to deliver good and efficient health care. They will understandably have a very different opinion to someone who has lost a child as a result of poor care or someone whose husband or wife can no longer work because of a negligent doctor.

I think a good starting point is to point out that when we access NHS medical care we are not entitled to gold standard care but to a reasonable standard of medical care. The NHS was created from the idea that good and reasonable healthcare should be available to everyone when they need it and the NHS is one of our country’s proudest achievements.  In the main, medical treatment is carried out to a very high and competent standard and many medical professionals work tirelessly to provide great care.

Critics will argue that it is both morally and financially wrong to sue the NHS because funds are diverted from Trust budgets to meet the cost of compensation. On the other hand though, if someone is injured and unable work or do the things they love as a result of a medical accident should the state not compensate them? In the worst case scenario, where a family loses a loved one through the actions of an irresponsible doctor should they not receive some kind of compensation for that loss?

I should mention that when you make a claim for medical negligence against the NHS, you are not directly taking money from dying patients or sick children. The NHS sets aside a pot of money for this type of eventuality – its insurance. Most companies insure themselves through an insurance company but, because of its size, the NHS is unable to do this and so they self-insure. We do have to be honest though, and acknowledge that the cost of compensating injured parties does of course affect their budget and some people just aren’t comfortable with that.

There is a lot of information published regarding how much the NHS spends defending itself and figures do vary depending on the source, but, generally speaking, clinical negligence claims account for less than 1% of the NHS budget. This doesn’t sound like a lot but you have to remember that the NHS has a huge budget so we have to be realistic about the amount of money this represents. And of course, it is not just about the amount of compensation.  Bringing the claim incurs legal  fees, and it is this which seems to make people angry. The Department of Health refers to one case in particular, featured heavily in the news, where the compensation received by the claimant was £11,800 but the legal bill for obtaining that compensation was £175,000.   Yes, even I would obviously say excessive and disproportionate. However, as this wasn’t a case that I or my firm handled, I looked a little deeper, hoping for a better understanding. The first clue is the amount of compensation. Between 1st January 2012 and 1st April 2013 the statutory bereavement award was £11,800 so, in this case, someone has died because of Clinical Negligence.  The claim was brought by the parents of a little boy who sadly died shortly after his birth. Such were the concerns about the management of the labour and the aftercare in this case that the coroner called an inquest to look at why this little boy died when his mother had a very healthy pregnancy. The inquest lasted for five days and evidence was called from a variety of experts, including midwives, obstetricians, neonatologists and nursing staff. The hospital, also very concerned about the patient safety issues, instructed their own experts to investigate. The family needed specialist lawyers to guide them through the very complex and distressing process of an inquest and it is easy to see how costs escalated, but, think about the parents in this situation, they want no stone left unturned. They have lost their baby and they want answers. In this case the coroner concluded that the boy’s death was entirely preventable, that he died needlessly as a result of poor care, and that if reasonable care had been given he would have gone on to live a healthy life.

So if we put ourselves in the parents’ shoes for just a moment then I think most of us would want to know exactly what happened and what went wrong. The reality though is that this can be a very expensive process. But, as an extreme example, it also helps us to understand why there is a lot of controversy about the type of work that I do.

This case clearly demonstrates that the issues behind the headline figures are very often complex and emotive and that there may be any number of reasons why a client may bring a claim. In my experience some want compensation so that financially they and their families can deal with the disability or the loss that they now face and build a more secure future. Most want things to change; they often say that they do not want the same thing to happen to somebody else and by making a claim, which a Health Care Trust is then required to investigate, lessons can be learned and things can be improved. Some clients simply want an apology. Sometimes a Trust will issue an apology. Sometimes a Trust, even when accepting responsibility, will not apologise and this can be very disappointing for the victim. There are of course a small percentage of clients who want “heads to roll” and, whilst every Trust will have its own internal disciplinary procedures, as solicitors we are never privy to nor can we be involved in any internal action a Trust may take against any individual members of staff. Ultimately when you proceed with a claim for clinical negligence the only thing you can hope to achieve is compensation to reflect the preventable harm that you or your family has sustained.

Based in Colchester and Clacton, Essex, Thompson Smith and Puxon provide Medical Negligence Claims advice across East Anglia. The team are experienced in handling medical claims from birth injury to misdiagnosis and treatment delay.

If you think you may have been the victim of a medical accident and would like to find out more please do contact one of our Medical Claims Advisors to find out more about how we can help you with your claim.