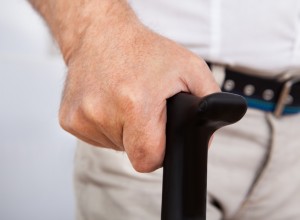 Julian Wilson dealt with a claim for a Mr A, who was injured in October 2006 when he was knocked from his cycle by a motorist. He suffered serious injury to his left ankle – the lower part of his fibia and tibia were fractured. He developed complex regional pain syndrome which meant that he was in constant pain. The pain was only partially relieved by painkillers and physiotherapy.

At the time of the accident Mr A was employed by a Bank. His role involved liaison with clients and the presentation of complex mathematical calculations. He had, before the accident, worked long hours and been able to concentrate for long periods of time.

Following the accident he was away from work for a period of about 6 months. He tried to return to work and was able to do so, taking one day a week away to do physiotherapy and to rest. He found it difficult commuting and difficult to concentrate. It was very difficult for him to perform his pre-accident job when he had to rest his leg on furniture and rely on a stick.

In early 2009 Mr A was made redundant. He found work within two months for an accountant in the outer-London area and commuted for a period of time by car. He managed to keep that going for 11 months but found it extremely difficult and exhausting and the job terminated at about the time he had reached the limit of his capacity. Although he worked for a period of about 6 weeks for another employer, he decided to change careers to one that was more suited to his disabled status. He re-qualified as a teacher of mathematics and works on a part-time basis.

When working for the Bank Mr A earned a good salary and was in receipt of bonuses which matched the size of his salary. Payments were also made into his pension. Claims for care, loss of earnings, loss of pension and physiotherapy were made. Expert opinion on orthopaedic surgery, pain management, care, employment, and accommodation were commissioned and relied on.

Proceedings were issued and an admission of liability was made early on. However, there was a significant dispute over the value of the claim. The matter was fixed for an assessment at the Mayors & City of London County Court in September 2012 and a final mediation by way of joint settlement meeting took place in early August 2012. The claim settled for £1.25 million.